I was doing my morning study today on fruit and was blessed with some clarity by a verse in Romans – the second part of this verse just popped off of the page!  The fruit word study will have to wait!!!

The second part of this verse . . . It needs to be emphasized!!

4 . . . you don’t realize that God’s kindness is intended to lead you to turn from your sins.

There are many that call themselves believers that choose the easy and wide road. I was one of those at one time.  It was EASY.  It is so easy that even the demons believe – it won’t save them.  According to Yeshua, if we choose this path it wont save us either – the text tells us what He will say – I never knew you.

Yeshua is God’s kindness – a kindness intended to lead us to turn to God from our sins (repent) because Yeshua means, and is, Salvation!

What was Yeshua saying when He stated “I never knew you?”

We have to look at some context.

It says in the text that there will be those that say “Lord, Lord!”  Who will those be.  These will be believers, but even the demons believe, so, what kind of believers?  Let’s start to answer that question by asking the following question, will they be “doers?”

In the text of Ya’akov (James), we are given an explanation about the difference between a hearer and a doer.

Ya’akov (James) give a command that is often overlooked prior to stating this:

21 So rid yourselves of all vulgarity and obvious evil,

and receive meekly the Word implanted in you

that can save your lives.

He then adds an emphasis that is important! – He says,

“DON’T LIE TO YOURSELF!”

But even more succinctly, he says:

22 Don’t deceive yourselves by only hearing what the Word says, but do it!

As you can see, Nike wasn’t the one that came up with this slogan!  Ya’akov (James) is saying don’t lie to yourself and think you can be a believer and at the same time be morally unclean (vulgar) and living a life in opposition to God’s word (depraved – obvious evil), He is saying to be a “DOER” of God’s word.

If you hear God’s word but don’t DO IT, you will forget.  In other words, 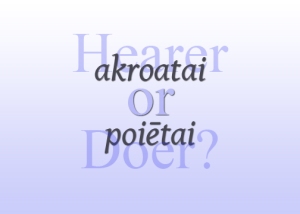 Ya’akov (James) doesn’t leave us in the dark.  He tells us quite succinctly what pure and undefiled (faultless) religion is:

27 The religious observance that God the Father considers pure and faultless is this:

How many congregations are full of religious people that call themselves believers but follow neither of these things?

How many churches send money to missions while neglecting the poor in their own midst on a weekly basis?

How many pastors talk about their favorite secular movies, bands, and sports teams from the pulpit each Sunday?

How many people brag about how their child knows when to look away or mute the television when objectionable material comes on?  Doesn’t it really beg the question, why are they being allowed to watch it in the first place if they have to mute or turn their eyes and ears away?

How many pastors make a statement during football season or the playoffs etc, similar to this:

“I know the game is coming on early today,

so I will be brief so that you can get home in time to watch it.”

When I was younger, I used to love those kind of preachers!  The pastor KNEW what was important – he was seeker sensitive!  He knew some of us had 3 or 4 fantasy teams to monitor!

The sad part is, this is how “hearers” are built.

“Hearers’ are discipled to be “hearers.”

A VERY important thing to remember before you discard what I have just stated is that turning to God from our sins is PURSUING HOLINESS!  All of the excuses in the world won’t omit this!  It is a litmus test.  Is what I am doing pursuing holiness or the opposite – Godlessness?

When I ignore the widow or orphan in my congregation, am I pursuing holiness or Godlessness?

When one talks about their favorite secular movie from the pulpit, are they pursuing holiness in doing so, or promoting Godlessness to the “hearers?”

When the church teaches that actions – good deeds – works are not required as a result of accepting the gift of grace that is His son Yeshua, that none of us can earn or deserves, does that produce “hearers’ or “doers?”

As it said in Romans at the beginning of this post,

It couldn’t be any clearer!

And yet, few people seem to want to take what Yeshua says seriously!

He warns the “hearers” that will come to him and say “Lord, Lord!” that they will NOT enter the Kingdom of Heaven!  Only the “doer’s will enter because they will be the only one “doing” what the Father in heaven wants:

only those who do what my Father in heaven wants.

Some will argue with our Lord, (as if that will matter or have any bearing), that they did great things in His name – even miracles!

Did they plead for the widows and orphans in their midst – did they help them?  Some might say, I pray for them.  Good!  But what good does it do to pray for someone while at the same time ignoring them by hoping someone else in the congregation or outside the congregation will meet their need instead of you? – Ya’akov (James) asks this very thing:

And did these people, that will argue with our Lord citing all of the things they did in His name, keep themselves from being contaminated by the world – or did they embrace it?

It is time to take inventory.  To look at ourselves critically in light of God’s word.  Are we “hearers” or are we “doers?”  There needs to be some urgency here!  Our Lord is coming soon!

The VERY WORST THING you could even have happen to you, is to face our Lord, on that day, and hear Him say:

‘I never knew you! Get away from me, you workers of lawlessness!’

Be “doers” and be blessed!

About Even If Ministries

Dani'el 3:17-18 (CJB) 17 Your majesty, if our God, whom we serve, is able to save us, he will save us from the blazing hot furnace and from your power. 18 But even if he doesn’t, we want you to know, your majesty, that we will neither serve your gods nor worship the gold statue which you have set up.”
View all posts by Even If Ministries →
This entry was posted in Living life Even if . . ., Salvation and tagged Adonai, akroatai, christianity, church, congregation, Discipleship, do it, doer, even if, God, hearer, james, Jesus, kindness, nike, orphans, poiētai, repent, salvation, save, turn from your sins, widows, word, worldly, Ya'akov, Yeshua. Bookmark the permalink.